27 days into Lent. You’ve made in halfway. Things start to get a bit tough here. Or worse, you forget why you’re even fasting. Lent is a marathon of a fast and so, it is vital that you keep focused on the reasons why we fast, and not on the fasting itself. Why are you still depriving yourself of food that you love? There really is no point to giving up food if it’s not replaced by food for the soul. Do not starve your soul as well as your body. Eventually the desires of the body will become too much to bear if there is no replacement.

As we progress through the Lenten Gospels, we see the Love of Christ that runs deeper. What could be better than a father that runs out to greet his son that had left him for prodigal living? A God that actively seeks His children before they even know they need Him. For while we were still sinners, Christ died for us. Christ pursued the Samaritan woman while she was still in sin to implore her to repentance through His Love.

The major thing we can take from the interaction of Jesus and the Samaritan Woman is the gifts Jesus offers to us all and the way we should respond to Him. After a long day of baptising the nations, Jesus was on His way to Galilee but there was one of His flock that He still had on His mind. From Judea, He detoured through Samaria on His way to Galilee. A Jew traveling from Judea to Galilee would generally go along the Jordan Valley (right) or along the coast (left). The third way was to go straight through the mountains of Samaria. This was not ideal because of poor relations between the Jews and Samaritans, but Jesus had a purpose for going on this specific journey. This was the way He needed to go to reach His beloved. 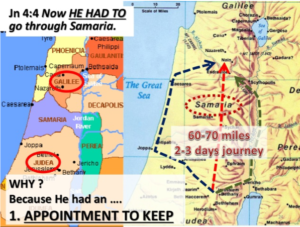 Jesus arrives early to the well, around the sixth hour and waits for the Samaritan woman. As she arrives, He asks for a drink. This would have come as a surprise to her for three reasons:

Why would Jesus choose her? What was special about the Samaritan woman that Jesus would go out of His way to see her?

To receive the message of faith, one cannot be puffed up. She was the perfect candidate. The Samaritan woman questioned Jesus, not to belittle Him, but to understand His message. Jesus, in His wisdom, walks carefully, gives us only as much as we can receive. For as long as we are puffed up, He distances Himself.

“God resists the proud but gives grace to the humble.”

Not because of any disgust or disapproval of our arrogance, but because He has no entry point. He cannot fill what is already full. We receive blessing through open hands, not clenched fists. The Samaritan woman may have been living in sin but she was open to receiving the Word. She did not think anything of herself, she chose to draw water in the heat of the day than risk facing another person. She was empty – and while living in this world this led her to despair and self-loathing. We aspire to empty ourselves first and foremost, to be filled with Christ through daily renewal in repentance.

Why is it that in the third world you can stand in the middle of a market place and preach and be heard but would never try that in Sydney CBD? Who would listen to you in Sydney? Try in a country like Kenya where they have so little to depend upon and nations are brought to Christ. It is in these countries that people are open to receiving the Word. They receive blessings and they receive them in abundance because they are ready to receive. The third world really does represent the modern-day Samaritan woman.

Without Christ, there will always be an emptiness of the soul, a void that cannot be filled. To alleviate this emptiness, we turn to other sources – to social media, to alcohol, to medications – anything that will temporarily fill the void. All this does is stop Christ from reaching us. He is sitting at the well waiting to meet with you, but we get lost along the way. We look to be filled but we look in the wrong places. For the Samaritan woman, it came in the form of male companionship. St Augustine says,

The five husbands represent the five senses since she has surrendered her soul to her physical senses. These could not satisfy her as they do not lead her soul to eternal life. They just satisfy temporary and short lived feelings. The one with whom she is living now, and who is not her husband, represents the mind (that is not sanctified) and that does not lead her to the Word and the Truth. Rather, it leads her to sin, and offers her incorrect knowledge. She needs the Bridegroom of her soul who will lead her to wisdom, truth, and fulfilment.

Christ could only fill the void these men had in her life through her honest admission in that she had no husband. At that point, she was ready to give it all up and be filled with Christ. Having received the Word, she leaves even her water pot behind and preaches the Messiah to the Samaritans. The same woman that could not face another human being was out proclaiming the message of Christ.

May we pray to empty ourselves like the Samaritan woman so that we can put to death all things of this world that fills the void that only Christ can rightfully fill. May we be resurrected in Christ and put on the new man that was created according to God in true righteousness and holiness (Ephesians 4:22).