The hand of the Lord has been shown mighty and strong throughout the history of St Mark’s. The main church was initially bought in late 1978 under the stewardship of Fr Moussa Soliman. It was bought in order to meet the demands of the increasing waves of the faithful who were seeking to continue in the faith, which had been preserved for them through thousands of years and through many persecutions. The main church building has existed for over one hundred years, with the foundation stone being laid by the governor of New South Wales, Admiral Sir Harry Lawson, being officially opened in 1906. The first liturgy was prayed in February 1979 by Fr Moussa. The church building was then renovated and three large sanctuaries were built in Coptic-style by church servants. The church was then visited in November 1989 by the Thrice Blessed Pope Shenouda III and the Altar of St Mark was consecrated. 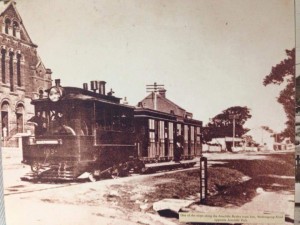 The earliest photograph of the site shows the Arncliffe to Bexley tram line (1909-1926).

Through the grace of God, the church has greatly grown and expanded over the years, now serving over 1000 families across all of Sydney. Matching this growth, the church site has expanded to include the Coptic Orthodox Theological College (1982) educating future servants of the church and the St Archdeacon Habib Girgis Sunday School Building (1991) used to teach young children, raising them in the faith and in their love for the church. The church now also includes: an Upper Room Church dedicated for English services and which conducted the first English liturgy in Australia; a children’s church allowing children to learn the liturgical life of the church by leading it; and a second Sunday School building.

Building on this foundation of love and the labours of those preceding them the church has seen the grace and blessing of God being showered upon it with the tremendous growth under its current priests. Each priest brings their own diverse talents to the church, whilst also maintaining the unity of love which has been the key to their success. Beginning with the ordination of Fr Yacoub Magdy in 1991, and the tireless effort of both him and his wife in welcoming new-comers to the church a spirit of love and service was fostered which continues till today. In 1998, Fr Augustinos Nada was transferred to St Mark’s Church to serve the growing needs of the parish and its youth, fitting in perfectly in building this love. Again the church required another priest to keep up with the growing numbers and so Fr Jonathan Ishak was chosen from amongst the servants of the church and was ordained in 2003. Another nine years followed before one of the youth who had been raised at St Mark’s was chosen to become the next priest in order to cater for the burgeoning number of youth, with Fr Mark Basily being ordained in 2012. Since then by the grace of God the church has continued to grow and so in 2015 Fr Michael Fanous was ordained a priest and later on Fr Elijah Iskander and also Fr David Shehata.

St Marks Coptic Orthodox Church welcomes you. There is something for everyone. The Church holds weekly bible studies, prayer meetings, youth meetings and fellowship, where the roots and belief of our ancient faith are taught. But more importantly, it’s where your questions are answered. The Divine Liturgy is celebrated daily – a true taste of heaven on earth. Our family is diverse and we offer all our services in the spirit of love. Supporting children holistically there is also a dedicated Children’s Liturgy, the St Mark’s Education Centre and sports programs including Gymnastics and Judo. Our Church and its Fathers have their arms wide open for anyone from any background. For their contact details and information on the Church and its services, please visit www.stmark.com.au. We look forward to having you join our family.