The Feast of St Mark the Apostle

On Monday, 8th May 2017, the Church will celebrate the Feast of its founder and Father, St. Mark the Apostle.  John Mark was a native of the North African country of Libya.  He was one of the 70 Apostles (Luke 1:10) and travelled with St. Paul and his cousin St. Barnabas to Antioch.  He then returned to Jerusalem and later accompanied his cousin to Cyprus. 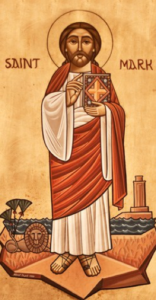 We are immensely indebted to the great Apostle and Evangelist St. Mark for the following reasons:

The first and shortest Gospel was written by St. Mark between 55-60AD.  The message of St. Mark Gospel is captured in a single verse, “For even the Son of Man did not come to be served, but to serve, and to give His life a ransom for many” (Mark 10:45).  Chapter by chapter the Gospel unfolds the dual focus of Christ’s life: service and sacrifice.
St. Mark portrays Christ as a Servant on the move, preaching, teaching and healing; moving towards the goal of offering Himself a sacrifice for all mankind.  Directed towards the Romans, the Gospel of St. Mark omits the Aramaic words and uses Latin terms in their place (Mark 4:21; 6:27 and 15:15).

Filled with the Holy Spirit and enthusiasm St. Mark headed to his Alexandria in approximately 45AD, where he founded the Coptic Orthodox Church, the Mother Church of Africa.  As his sandal broke and he went to a cobbler to have it mended.  He met Anianus, who accidently pierced his hands crying, “O Theos” (O the One God).  St. Mark rejoiced at his utterance and healed his wounds.  Subsequently St. Mark baptized him and ordained him Bishop and thereafter he became the 2nd Patriarch of Alexandria (68 AD to 83 AD).

The seeds sown by St. Mark flourished and within 20 years the flock increased and Christianity spread rapidly across Egypt.  The Church of Alexandria gave the world the greatest gift, Monasticism in the persons of St. Anthony, St. Paul, St. Shenouda, St. Pakhomious, St. Macarious who transformed the dryness of the Desert into a living paradise.  It has also produced distinguished theologians such as St. Athanasius (259-373), St. Cyril (376-444), St. Peter Seal of Martyrs, Origan, Panteaus and Pope Shenouda III.

St. Mark wrote the first liturgy which is used by the Church to this day.  This liturgy is distinctive in that it has several Litanies inserted within.  For the first 400 years of the Church it was the only liturgy used, well before the Church began using the liturgy of St. Bassilious or St. Gregory.  St. Cyril I (the Pillar of Faith, 24th Patriarch of Alexandria) modified it and thereafter it earned his name.  When St. Athanasius, 20th Pope of Alexandria ordained Abba Fromentius as the first Ethiopian Patriarch, he gave him a copy of the liturgy.

In order to combat the secular institutions in Alexandria, St. Mark established the first Theological College in the world, the School of Alexandria.  St. Mark appointed Justus as its Dean (later Justus became the 6th Patriarch of Alexandria).  Among them include Patriarch Clement, Origen, Didymus the Blind and Dionysious.  As the fame of this School was so great, Emperor Theodosious issued a decree stating that whoever ran away from it would be considered a pagan.  Most of the eminent Church leaders were either Deans, teachers or students of the School of Alexandria.  In it the first Curriculum of Christian Theology was formed and the allegorical method of Biblical exegesis was devised.

St. Mark laboured greatly and suffered for Christ and His Church.  In May 68 AD, St. Mark was seized and dragged with a rope around his neck in the streets then incarcerated for the night.  That night the Lord Christ appeared to him and said, “Peace be with you My beloved Mark”.  This strengthened St. Mark greatly.  Thereafter he earned the title The Beholder of the Lord.  The following morning, the same ordeal was repeated until he died a martyr for the sake of God whom he had so faithfully served from a young age.

The Spirit of Martyrdom permeated the entire Church, producing innumerable martyrs and confessors and thereafter deciding to commence its calendar with the era of the martyrs, calling it in the Year of the Martyrs.

St. Mark’s house received considerable heavenly blessings.  Christ the Lord instituted the Sacrament of the Eucharist (Matthew 26) there Christ ordained the Apostles in the Upper Room (John 20:21-23), the Holy Spirit descended upon the Apostles whilst they were with one accord (Acts 2:1-10).

The home of St. Mark became the first Church in the world where St. Peter, after being released from jail, went where members of the Church were praying together (Acts 2:12).

The life, works, mission and achievements of St. Mark is a tremendous inspiration for us to serve Christ and labour for His children and Church.

St. Paul attests to St. Mark’s distinguished ministry saying, “Bring Mark to me, he is useful in the ministry” (2 Timothy 4:11).

Please remember us in your prayers.
In Christ,
St George Church