Claim to fame: He was a slave for a man from Rome called Philemon who believed at the hands of St.Paul, when he heard his preaching in Rome. Philemon departed from Rome on a business trip and took with him Onesimus among others of his servants. There the devil enticed Onesimus, so he stole money from his master and fled to Rome. Onesimus attended the preaching of St. Paul, which he kept in his heart. He believed at the hand of St. Paul and his heart was filled with the grace and the fear of God. He remembered what he stole from his master and from others and since he did not have anything left from the stolen money to return to its rightful owners, he was sorrowful and told St. Paul about that. St. Paul comforted him and wrote an epistle to Onesimus’ master, Philemon, informing him in it, that Onesimus became a follower of Christ saying, “I appeal to you for my son Onesimus, whom I have begotten while in my chains.” St. Paul asked him to treat him gently and not to mind what he did but to consider what he lost as owed by the apostle. When Onesimus took the epistle to his master Philemon, he was pleased by his faith and repentance and treated him as the apostle commanded. Furthermore, he offered him more money but St. Onesimus refused saying, “I am rich with Christ.” Then he bid Philemon farewell and returned to Rome. St. Onesimus continued to serve St. Paul until his martyrdom

Quote: Servants, be submissive to your masters with all fear, not only to the good and gentle, but also to the harsh. For this is commendable, if because of conscience toward God one endures grief, suffering wrongfully. (1 Peter 2:18-19) 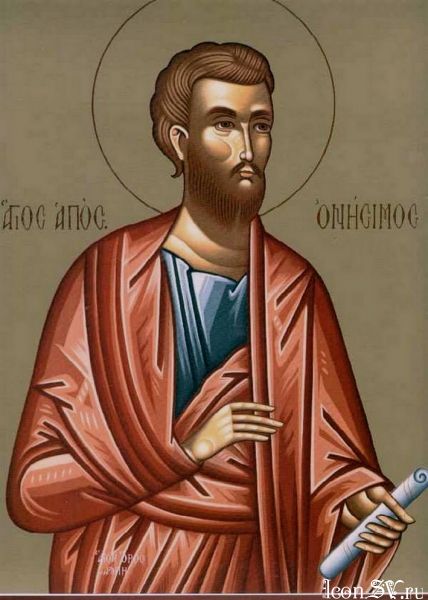