Claim to fame: St. Cyril of Alexandria, (born c. 375—died June 27, 444; Western feast day June 27; Eastern feast day June 9), Christian theologian and bishop active in the complex doctrinal struggles of the 5th century. He is chiefly known for his campaign against Nestorius, bishop of Constantinople, whose views on Christ’s nature were to be declared heretical.

The conflict came to the fore over Cyril’s insistence that the Virgin Mary be called Theotokos (Greek: God-bearer) to describe the intimate union of the two natures in the Incarnation. Nestorius refused to accept such terminology, and their dispute was referred to the council at Ephesus in 431.

Quote: “As two pieces of wax fused together make one so he who receives Holy Communion is so united with Christ that Christ is in him and he is in Christ.”

Fun fact: In addition to commentaries on selected passages of the first five books of the Old Testament, on Isaiah, and on the Gospels of John and Luke, Cyril’s writings included a reply to Against the Galileans by Julian the Apostate, Roman emperor from 361 to 363, who had been brought up as a Christian but announced his conversion to paganism on his accession. This reply, the latest of ancient Christian apologetic works against paganism, also preserves significant extracts from Julian’s works. 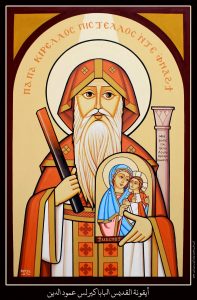